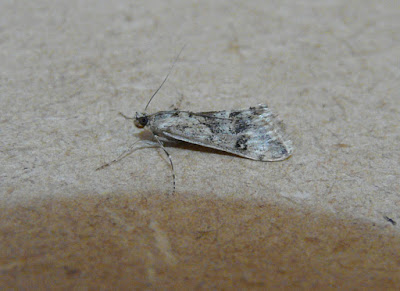 
A massive thank you to Nigel Pinhorn  for getting in touch and inviting me to see this rare moth. Nigel trapped it a couple nights ago at his home in Exwick. It will probably prove to be the first Devon record and has originated from either southern Europe or north Africa. It comes after a flurry of recent sightings along the south coast, with the first for Britain, as far as I'm aware, being trapped in Bridport, Dorset as recently as December 19th. It's a great looking little moth but I guess you've got to be in to moths to truly appreciate it! I'm annoyed with myself for not running my trap recently but hopefully there will be more opportunities in the coming weeks. The micro that I trapped a couple nights ago has been identified as Crocidosema plebejana or Southern Bell - many thanks to Nigel and Nick for their help.
Posted by matt knott at 01:35