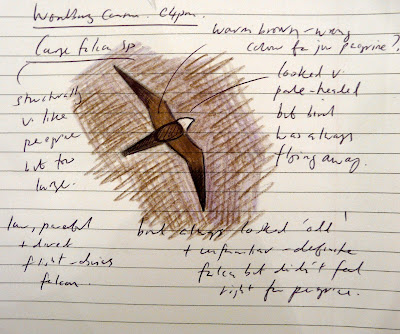 I spent the last half hour of daylight stood just below Woodbury Fort, hoping for a late Hen Harrier or Short-eared Owl. I was a bit thrown by a large falcon that sped past at about 4pm, quite low and fast - a powerfully -  built bird, not unlike Peregrine in structure, but perhaps a bit too large. Difficult to judge  on a lone bird against a dark backdrop. The sighting was all too brief but I clocked very warm brown tones on the upperparts and a contrastingly pale head. This gave the whole bird an odd look and for a second I had to question whether it was a falcon at all, such was the unfamiliarity of the colour tones. I watched it until it soared out of sight and over the tree line. Unfortunately by the time I actually got on it, it was flying away from me so the views weren't great. It was perhaps a Saker or possibly some sort of falconer's hybrid but I don't think it was Peregrine.
Whilst stood in one spot there was continuous movement of passerines overhead, with several Meadow Pipit, Redpoll, 1 Brambling, a Yellowhammer and 1+ Reed Bunting recorded in a short space of time.
A quick glance off Mudbank earlier had revealed relatively high numbers of waders with 70+ Redshank, 2 Greenshank, 5 Ringed Plover, c100+ Turnstone, 7 Grey Plover and c1/200+ Dunlin. A single drake Teal and the Pale-bellied Brent Goose were also noted. 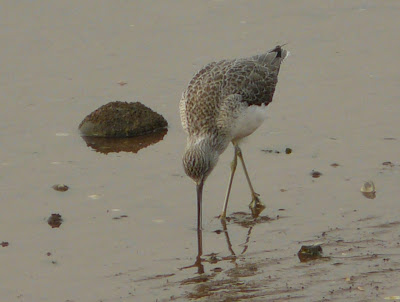