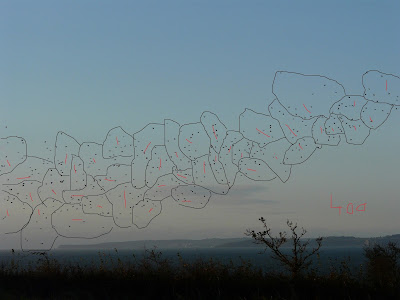 Last November Nick and I witnessed 16,000 Woodpigeon pass over Orcombe in a short space of time. It was, as always, an exhilarating experience. It was also very frustrating because despite our best efforts we felt we were under-counting. Nick reckons there could have been a margin of error of up to 25% (which could have put our total at 20,000) which I have to agree with. In fact, when I count on my own, I would say the margin is potentially even greater. It could be  significantly more on a very large flock. One thing is for sure, counting in pairs or groups is much more accurate than counting on your own.
This morning (21/11) I was delighted to discover that I hadn't missed watching Woodpigeon migration this year. I thought I'd photograph the flocks, in an attempt to get a more accurate count. This proved useful but extremely time-consuming and tedious. You can see how I did it - still not 100% accurate but far more so than counting in the field.
This method is only useful up to a point though. Firstly, I didn't photograph every single bird and secondly the rate of movement changed in the short time I was there.
When I arrived at the top of Gore Lane, the birds were moving west, above Maer Valley in distinct flocks from c30+ to c900+. The majority of flocks appeared to swing around and head towards the river mouth but some shot straight out into Dawlish Bay and were lost to sight. By the time I stopped photographing, around 0815, the flocks were starting to stretch out and merge just off the coast. Some below cliff-top height, some just above. The 'flow rate' had increased and was still going full-tilt when I left at 9am. Counting these birds was near enough impossible. I was estimating 'chunks of 100 at a time - wildly inaccurate!
My rate of movement, based on photos, is estimated at 20000 per hour. If that rate was sustained throughout the morning then at least 80000 birds passed Orcombe yesterday. However I don't know that rate was the same all morning. I'm pretty sure it was considerably higher than that from 0815 - 0900 at least but I'm guessing it dropped off at some stage as the morning progressed.
At the Warren, to the west,  they counted c54000 birds and at Sidmouth - c36000. This shows that birds were moving along a section of coast, but where did they come from and where did they go after that? As always, more questions than answers. 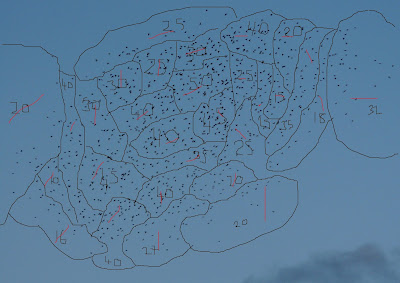 Counting these big flocks was a complete pain. The above is 870+ birds and below is 720+. As most birders will testify, the urge to quantify these movements is strong. It's a shame though because all you really want to do is absorb the spectacle. To just take it all in. Next November I think I'm going to try not counting them! This morning (21/11), some birds dropped and flew at ground level across the fields. It was truly awesome. Last November you could hear the wing-beats of hundreds of birds as they passed in still conditions. It was too windy to hear that today (21/11). 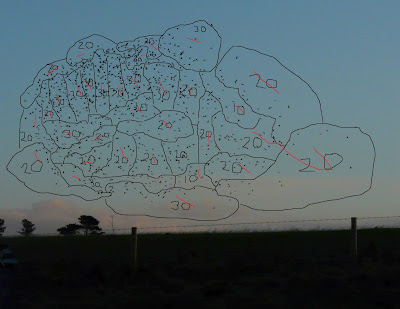