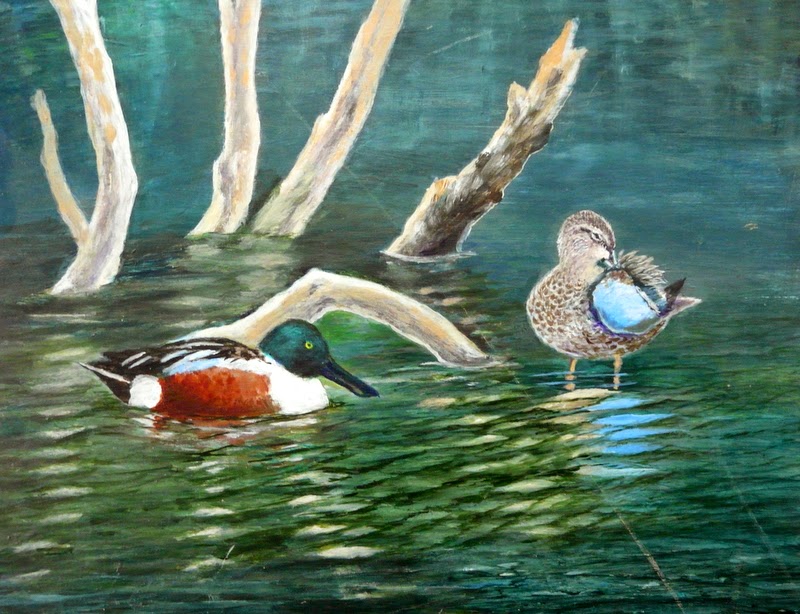 Female Blue-winged Teal with drake Shoveler by John Fortey.
Two good birds on this date. The first remains the only blue-winged teal I've seen in Devon. It was found by myself and Kev Rylands on Newcross Pond, Kingsteignton, a great little site that I used to visit a lot, years ago, when I lived in Newton Abbot - a handy diversion en route to the Teign Estuary. Over the years it pulled in smew, ring-necked duck, long-tailed duck, common scoter, goosander and ruddy duck among a load of other good stuff. Sadly it has long since gone, filled in by the Ball Clay works company - a really sad loss.
Below is my logbook extract for March 27th 1997:
First day of my Easter holidays. Kevin and I checked the Passage House high tide but it was disappointing, with very few gulls and no waders. Ten little egrets was a good count but there was no sign of any migrants. Kevin phoned the line from the restaurant but there was nothing locally, and only the little crake (Kent) nationally. Not sure what to do, we resigned to checking Newcross for hirundines and possibly an odd diving duck. An initial scan produced a few tufties and a small group of shoveler. Kevin said "four shoveler" and I replied "no five - there's a female with them". I looked at this brown duck asleep on a protruding stick and said "no it's not a shoveler, it's too brown, not orangey enough, and it's too small". I got Kevin to look at it through my scope and we pondered its identity. Thoughts of teal and garganey were our first ideas and I became more curious because I was sure I'd seen a blue-grey forewing patch as it ruffled its wings slightly. I mentioned this to Kevin but thought I'd imagined it, when it popped its head out and stretched its wing out to reveal a blue-grey forewing! The head pattern definitely wasn't right for garganey - lacking the striking cheek stripe. I became sure it was a blue-winged teal because of the distinctive pale loral area. I took some brief notes and we decided to dash back to Kevin's to check the books and phone the news out.
On our return the bird was still there and we spent the whole afternoon watching it. The light improved as the afternoon went on. The blue-winged teal stuck to the shoveler like glue and provided good views most of the time, though it was always quite distant.
The bird was present until April 19th 2007, commuting between Newcross and Bowling Green Marsh on occasions! I saw it on Bowling Green too. It remains the only record for the Exe Estuary, though there are seven previous records for Devon, involving possibly 10 individuals, and one subsequent record from Paignton on 25th - 26th December 1997 (The Birds of Devon - Mike Tyler).
A short while later, the late John Fortey gave me a painting he'd done of the blue-winged teal with its partner shoveler. I was so chuffed and just love the way he captured the dark water and protruding branches that characterised Newcross. 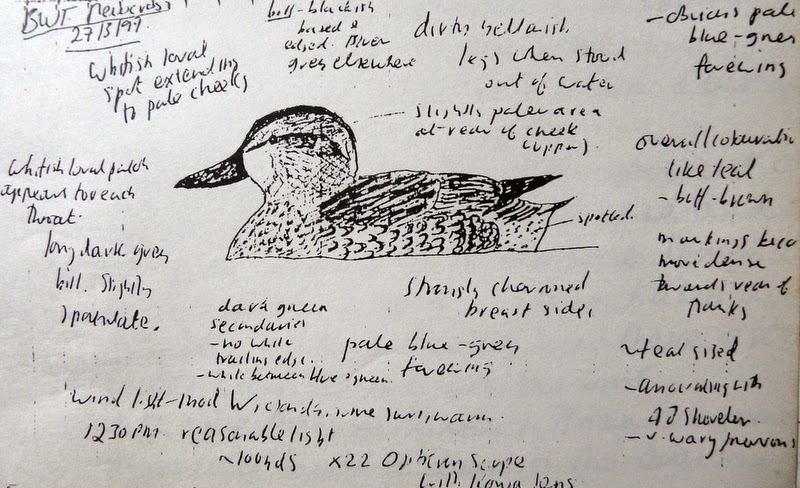 My original shocking field sketch - I'd twitched a blue-winged teal at Tehiddy Country Park in Cornwall in October 1995, so I had pretty good idea what it was. Female cinnamon teal had to be ruled out though. 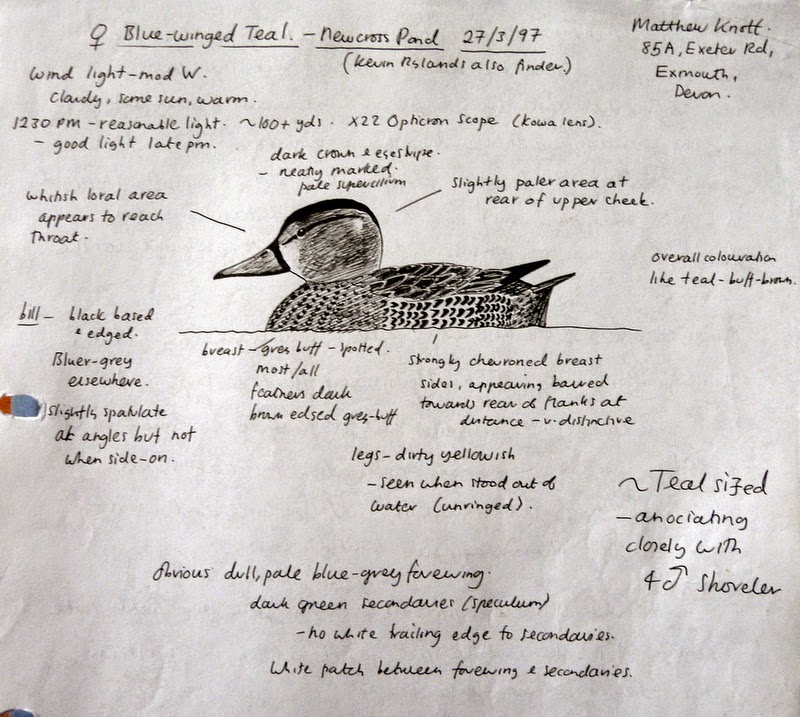 This is the neat version of the field sketch that was submitted to the BBRC alongside the original sketch and Kev's notes. 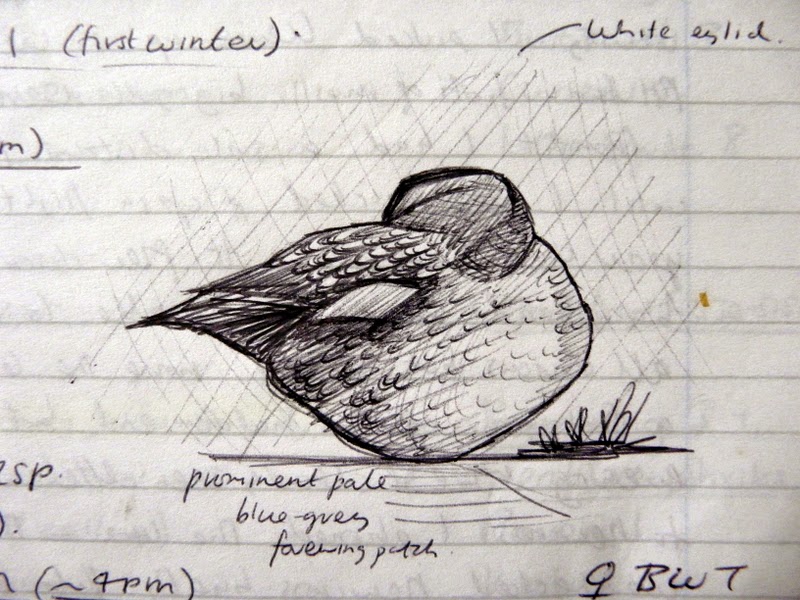 This sketch was done of the bird when it was at Bowling Green Marsh.

The second quality Devon bird that I've seen on this date, this time in 2002, was the Exeter Canal little bittern. It was initially found by a dog-walker, swimming in the canal (the bird not the dog-walker) in the incongruous setting of the Grace Road playing fields, with warehouses and industrial-looking buildings as a backdrop. It was obviously in poor condition and sadly picked up later, moribund, before dying in care the next day.
I finished work and turned on my phone to find messages from Kev Rylands and Chris Bishop. When I arrived mid-afternoon it was in canal-side vegetation but it soon walked up the bank and on to the adjacent playing fields before returning to brambles on the canal bank. We watched it struggle to swallow a spiny fish and I attempted to sketch it. A beautiful and charismatic little bird.
This was a very welcome Devon tick for me. I'd dipped the Cockwood bird of 1988 and was unable to get to a couple Slapton individuals. I just wish this bird had been fit and well. 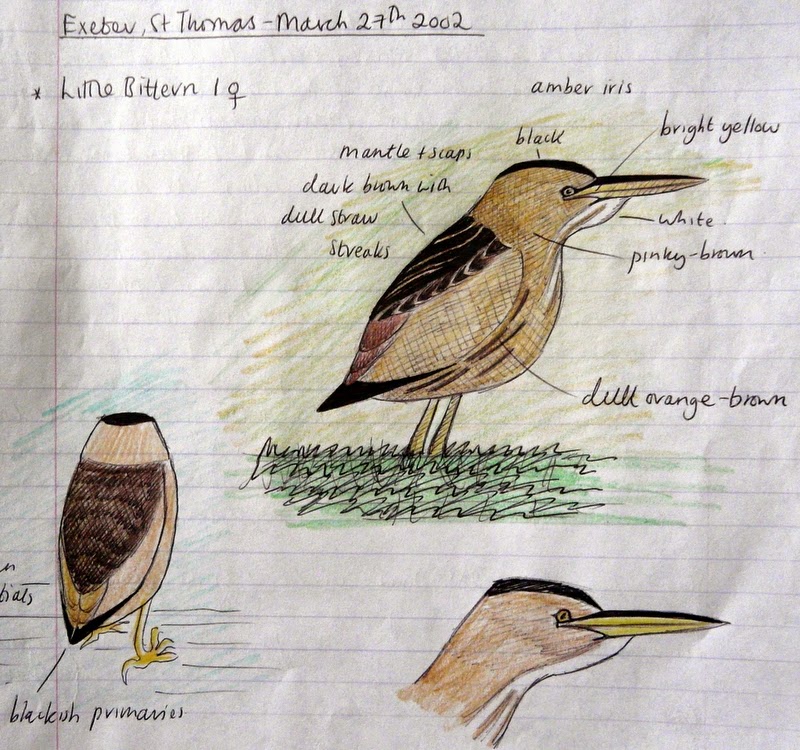 I'm not proud of these field sketches - they don't do the bird justice at all and I've failed completely to capture the essence of what was a stunning little bird. I wish I'd had the camera back then because the bird walked past just feet away. 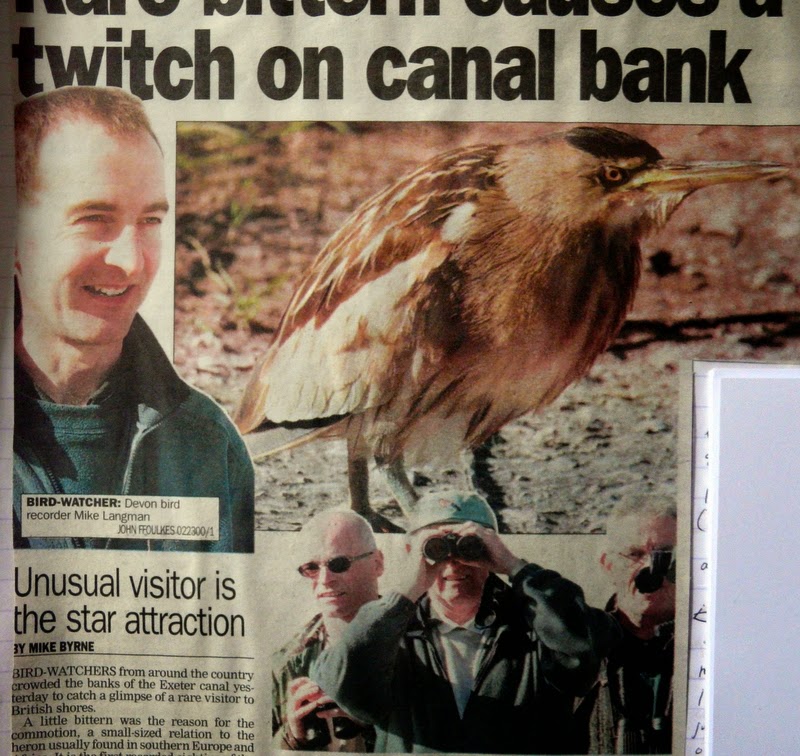 I kept this newspaper article. Recognise anyone?
Posted by matt knott at 10:58