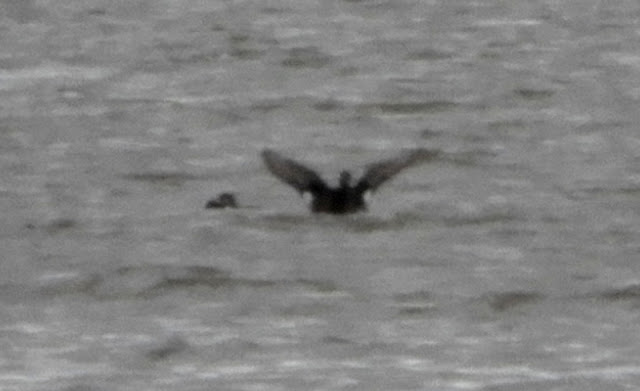 Gadwall are a rare treat in Exmouth. A male was head-bobbing to a female just upriver from West Lodge late this afternoon. By the time I decided to try for a photo the pair had steamed further upriver, so my photo is truly awful (no surprises there). Three Goldeneye were diving mid-river but I didn't see much else of note.
The day started with a fairly brisk south-westerly which had died down by the afternoon. An early morning sea-watch from the raised beach huts, between shortly after dawn and 0825, produced counts of 14 Fulmar (all south), 2 Red-breasted Merganser, 3 diver sp, 4 Red-throated Diver and 4 Common Scoter. As well as a steady passage of Gannets and a few Kittiwakes there were several auks passing. I managed to pick out 2 Razorbill and 3 Guillemot amongst the nearer birds.
Posted by matt knott at 11:06