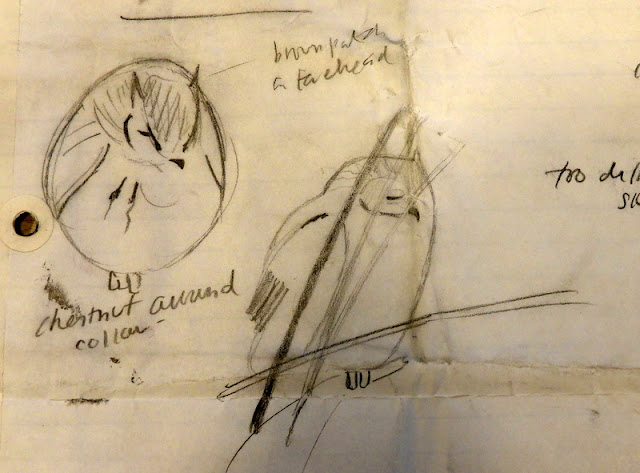 Horrible weather today so a little reminiscing, and for no particular reason a look back at the Morewenstow Scops Owl that I twitched with the legendary Pete Dennis, back in April 1995. A Devon Scops Owl would be very much appreciated! My logbook entry for April 9th 1995 reads:
Pete Dennis phoned up last night and we arranged to have a day's birding down in the South Hams.
I was up very early and was picked up by Pete at just after 0630. We decided on Prawle and gave the reserve, bunkers, the point and Pig's Nose Valley a thorough search.
Shortly after we'd left the car, and were walking down the field, I spotted a diver flying overhead, over the reserve behind us. It was clearly either Red or Black-throated and we were both pretty sure it was a Black-throat, but we didn't get enough on it to be sure.
Along the bunkers I spotted a tail quivering in a bush - a superb male Redstart but very 'darting' so only brief views obtained before we left it in peace.
The rest of the morning was uneventful and at about lunchtime we returned to the car for some food, and sat up in the reserve for a while. Pete had a ten minute kip and at around 1430 - 1445'ish we decided to push on to Slapton.
We stopped off at the phone box just before Torcross to phone the line. To my astonishment they put out the regional news before the national news - "In north Cornwall, a Scops Owl at Morewenstow until 1230 at least." I made a follow-on call and called Pete in to the phone box where we took directions, jumped in the car and went!
I navigated us up towards Plymouth, over the Tamar Bridge to Launceston, Bude (nearly), Kilkhampton and finally Morewenstow. Some 'nutter' twitchers overtook us on the lanes at outrageous speed and at around 5pm we found Morewenstow Church (with about 40-50 cars already in the carpark) and headed out along the footpath towards the throng of twitchers already gathered below.
The scenery was incredible - huge rugged cliffs and shoreline and deep valleys. The twitchers passing us on their way back gave us the good news that the bird was showing well - relief! We eventually got down to the bottom and were looking from a bramble-covered bank, across and below to the other side of a stream, where the bird was perched at the bottom of a bramble hedge/thicket - a round 'bundle' - motionless.
I sat down to attempt to sketch it but my attempts were very poor. We waited until gone 7pm and after two hours of it sitting motionless, with its eyes shut, it woke up and clambered further up the hedge to rest in a hollow - in the process showing us its back, wings and most importantly, in my view, its yellow eyes - a gorgeous bird and one which I never thought I'd see in this country, let alone see well and at close range!
I was absolutely shattered by the end of the day and we returned home via Holsworthy, Okehampton and Moretonhampstead to arrive home at 10pm - a superb day!
Apparently the finder had been watching Peregrines at the top of the valley on the other side and had flushed this bird which had flown down the valley and landed on a bush. He'd then pursued it before it flew into the thicket it was in. He knew it wasn't a Little Owl, which are also in the valley, so he phoned another birder who came down and identified it as Scops Owl. The bloke had then legged it back up the valley and made a phone call to the line. Luckily he had the line number with him and enough change to make the call! 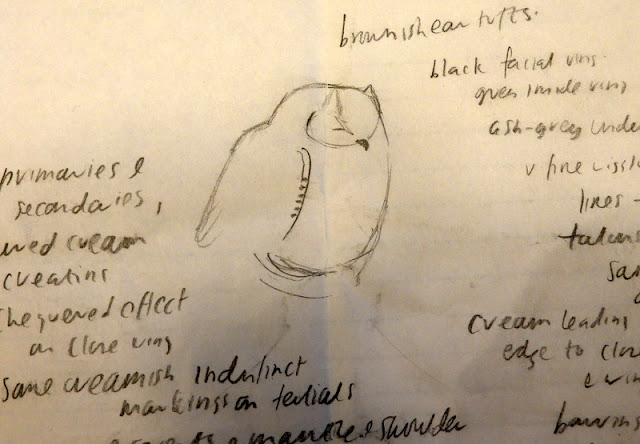 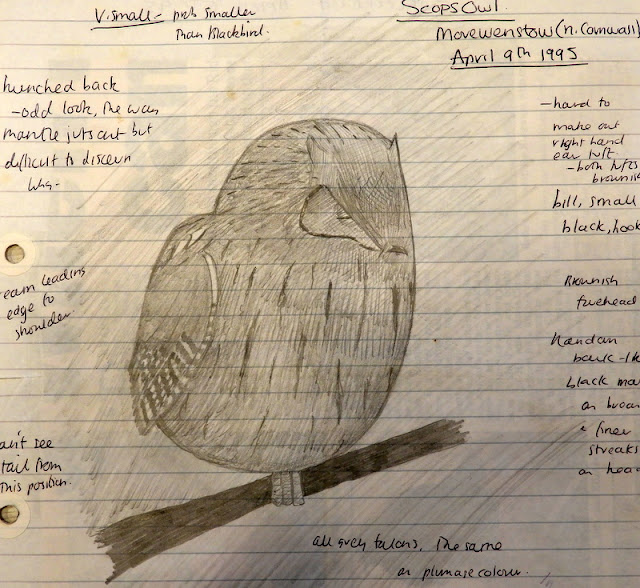 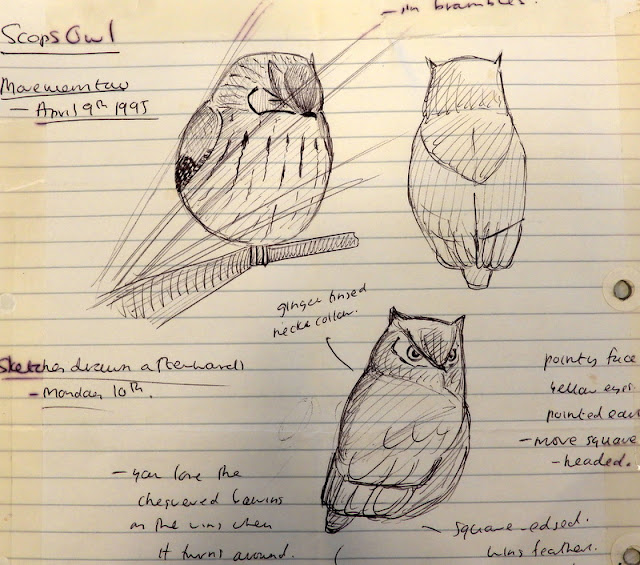