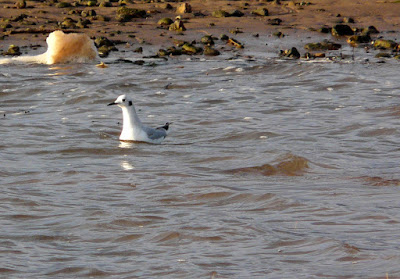 The Bonaparte's Gull again showed superbly, down to a few feet, off Shelly Beach late this afternoon. Also off there, a first or second winter Glaucous Gull roosting on Bull Hill. It was at too great a distance to confidently age it. Also of note, on an Exmouth level at least, a single Little Grebe inside the Marina, along with a Great Crested Grebe. Both affording good views but denying me the opportunity to get a decent photograph. I've always found Little Grebe difficult to get in Exmouth but the Marina seems like the most reliable spot.
The Black Redstart was again showing at the entrance to Warren View playing fields this afternoon and yesterday, in the last half hour before dusk, I counted 80+ Pied Wagtails flying just off Exmouth Beach towards the river mouth. There were 2 Great Northern Divers off there too, along with a drake Teal, looking deeply uncomfortable bobbing up and down in the swell. 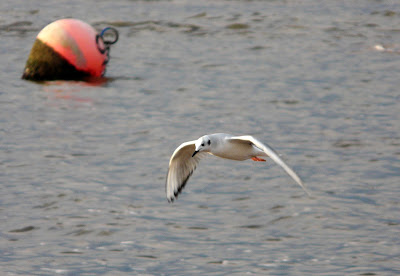 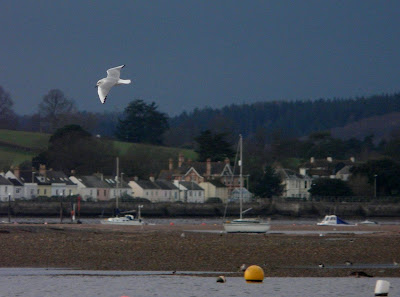 Dark skies and Starcross in the background. 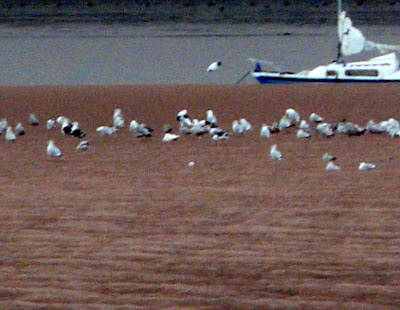 Glaucous Gull - this bird was at just the wrong angle initially to get a proper idea of size. As it got later however it stood up, flapped its wings and started to chase other gulls around it. At that point its height and obvious bulk next to the Herring Gulls became apparent. Its bill was pinky-based but that's  as much as I could see. Good to get another one after a blank year last year.
And finally some great news about the the Orcombe Patch. Derek and the RSPB have been in negotiations with the farmer to provide a 5 hectare 'block' of land at the top of Gore Lane, that will be planted with a mixture of crops to attract birds in the autumn and winter. This is a wonderful piece of news at a time when things were looking pretty grim for the birds up there. It is also hoped that the hedges will be better managed to provide more cover. Fingers crossed it all pans out, with the planting expected to commence next year. Nice one Derek!
Posted by matt knott at 09:40