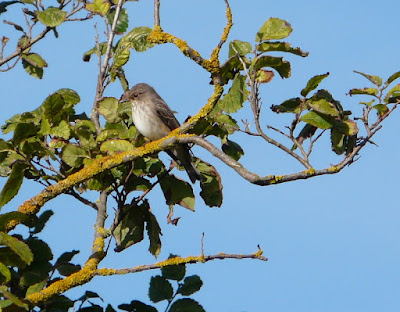 Spotted Flycatcher
It's been a quiet week bird-wise again this week, but yesterday evening I had 1 Spotted Flycatcher, 2 Goldcrest and c10+ Chiffchaff on Orcombe after work. The apparent Ridgway's Cackling Goose showed distantly off the Imperial later on and it was great to bump into Chris Townend there.
At dawn this morning the Ridgway's Cackling Goose was with 360+ Brent Geese off Mudbank, but again it was mid-river, so I have yet to get a photo. Luckily Dave Stone secured some fantastic images on Monday. The best time to see the bird is probably an hour or two after high tide when the Brent Flock moves into the Saltmarsh by the Leisure Centre. I haven't managed to get down there at this time yet though. Of course it's anyone's guess where it has come, from but I prefer to keep an open mind.
Also off Mudbank this morning - 2 Peregrine, 1 Greylag Goose, 2 Teal and decent numbers of other species of the usual wildfowl. No time to count them though. 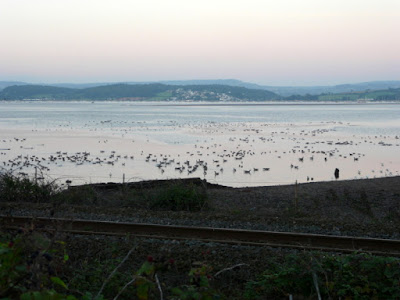 Large numbers off wildfowl off Mudbank this morning. The Brent flock was on the sandbar - just visible in the above photo. You can just about make out Cockwood and Starcross on the opposite side of the river. 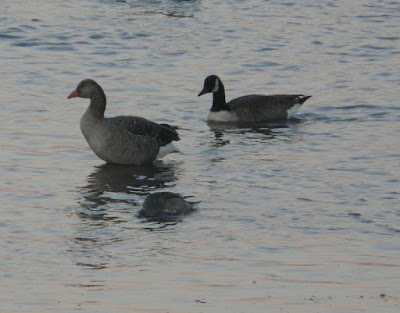 Greylag Goose is a very infrequent visitor to Exmouth. This bird was with a large Canada Goose flock off Mudbank this morning.