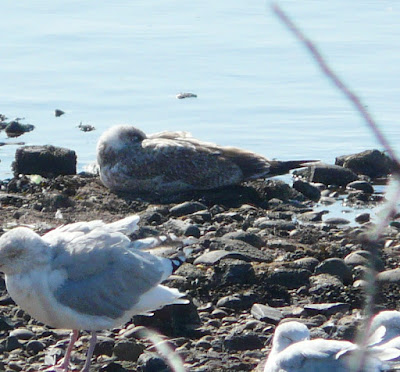 The above photo illustrates the extent to which the nape is streaked - a pro-Caspian Gull feature but not a diagnostic one.

I've got the sort of brain that, when it comes to birds, can easily tie itself up in knots. If I find a rarity that's at the trickier end of the identification spectrum I often talk myself out of it. Sometimes rightly sometimes wrongly. I worry about making the correct decision and only submit stuff if I'm 100% happy with it. When you make mistakes with ID as I often do, you become even more self- critical and probably over cautious. I've made mistakes in the past (including mis-identifying Casps/Yellow-leggeds) and I'm sure I'll make more in the future, but that prospect doesn't worry me any more like it used to when I was younger. Tuesday's Caspian Gull has been occupying my mind and I've been trawling the net, re-reading papers I've already read and studying countless photos to be sure I can eliminate Yellow-legged Gull from one of the easterly populations, or even a Yellow-legged/Caspian hybrid. When I received a message from a fellow birder suggesting it was indeed a Yellow-legged Gull I crumbled and decided it wouldn't be safe to submit. However, having spent more time looking at the 200 or so crappy photos that I took, I think the original identification is sound.  I'd be really happy to hear your thoughts but appreciate that the following may well bore you witless! 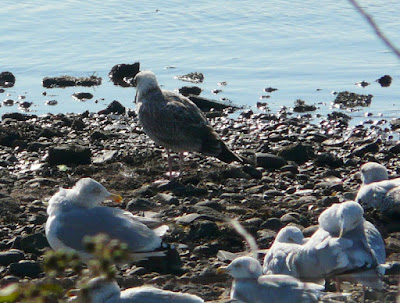 The structure in the above photo just looks a bit odd and unfamiliar. Hard to explain why but is in part due to a small head stuck on to a large body. The collar of streaks contrasts with a white head and the legs look long and thin. You can just about make out a wing-bar effect, caused by pale tips to median coverts and greater coverts sandwiching the dark bar created by the dark bases to the greater coverts. This effect may become more pronounced once the bird reaches first-winter plumage and is a good pro-Caspian feature. It is in transition at the moment from juvenile to first-winter plumage, arguably the most difficult and rarely encountered plumage in this species. 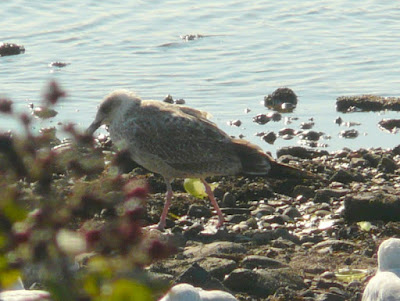 One of the things that bugged me most was the shadow around the eye. This photo was taken looking directly in to the sun (by necessity not choice). You don't see that characteristic dopey look that Caspian Gulls show, created by the tiny eye being set centrally in the head and quite high up, and of course a dark area around the eye is absolutely spot on for Yellow-legged Gull. There is a little dark triangle in front of the eye that makes it look further forward and larger than it actually was. When I observed the bird later on however, this shadow all but disappeared and it looked quite different. 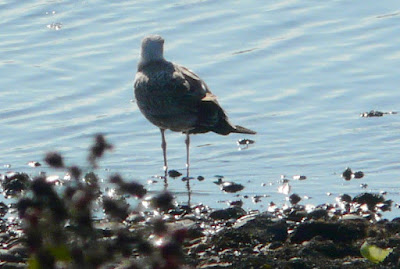 One of the most striking feature of this bird is its crazy-looking legs. They just look wrong, as if they shouldn't be able to support the bulk of the body. Both the tibia and tarsus were very obviously longer than on adjacent Herring Gulls'. Yellow-legged Gulls can indeed look long legged but all the birds I've ever seen have had quite sturdy legs - never stilt-like as in this bird. 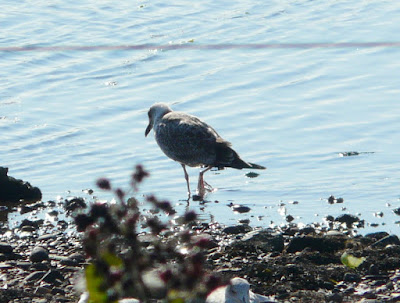 Again - just look at the tibia length as it pads through the shallows. I've personally never seen legs like this on Yellow-legged Gull. The bill appears tapered. 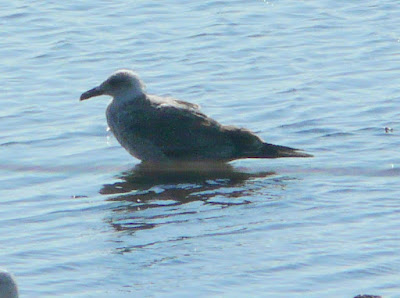 Note the bill shape - fairly parallel-sided, weak gonydeal angle and tapering from a broader base. It lacks the blob-tipped or hatchet-like bill of classic Yellow-legged Gull. Bill length and shape are obviously very variable on both species, but I would say the structure on this bird better fits Caspian Gull. Also note the tiny head relative to large body, long sloping forehead, rounded nape and attenuated rear end, accentuated by very long wings and virtually no tertial step. All pro-Caspian features though admittedly none are diagnostic. 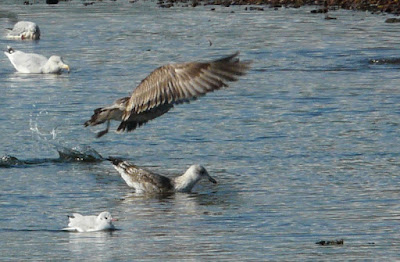 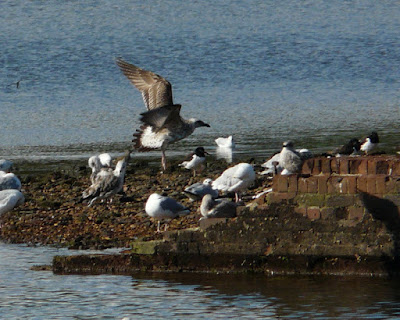 The stripey-looking upperwing is created by pale tips to median coverts contrasting with muddy-brown bases to greater coverts which in turn have pale tips which contrast with dark secondaries. The 'window' in the inner primaries looks paler than on typical Yellow-legged Gull, but not as light as in Herring Gull. 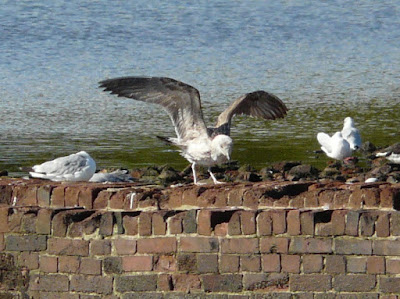 The axillaries and underwing coverts are all pale. This used to be a more significant identification feature but recent research has shown that Yellow-legged Gull can have equally white-looking underwings and, conversely, Caspian Gulls from their core range can show quite dark underwings. It is surely the case however that your 'average' Yellow-legged should look way darker than this. Some can be really dark. On the brief field view I had, the axillaries appeared lightly freckled pale coffee-brown but I'd have appreciated a better view. 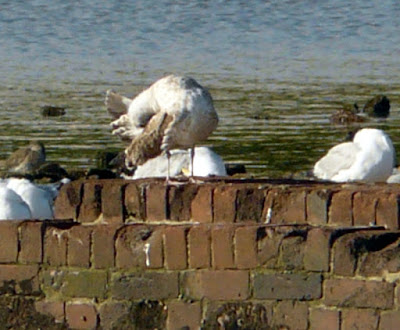 I've included this shot to show the extent of black on the outer tail. On the vast majority of Yellow-legged Gulls that I see, the black tail band narrows towards the outer retrices. This is another feature that isn't as highly regarded as it once was as both species show variability in this area. However I was still pleased to see a tail band of even width across the whole tail. 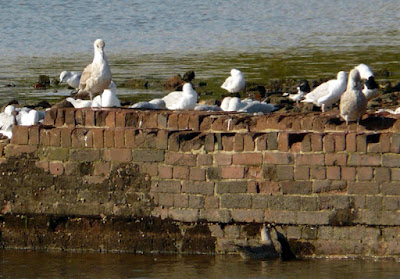 In the above shot the Caspian Gull is stood on the left of the wall. Note how much bigger it is than the Herring Gull to its right. This shot also illustrates the significant difference in leg length and neck length. Handy that both are preening the same spot! Throughout most of the period that I observed this bird it had its neck wound in but it always looked big - presumably a male bird. 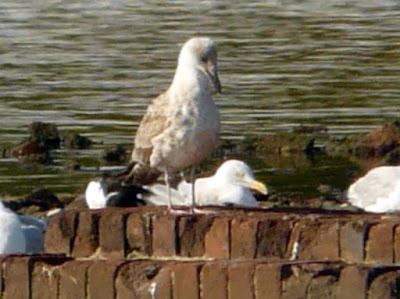 From this angle the greater coverts give the impression of  a thick dark bar. Notice how the eye shadow has all but vanished in better light and note the head shape. 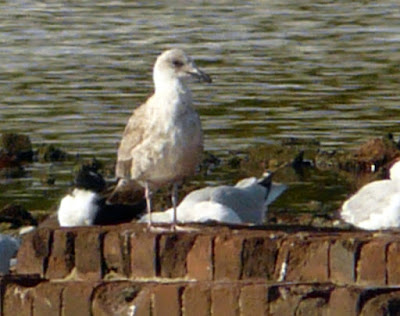 The above photo and the one below give some idea of the tiny beady eye which lends this bird the characteristic dopey Caspian look. At least that's how I see it - some people may interpret it differently. 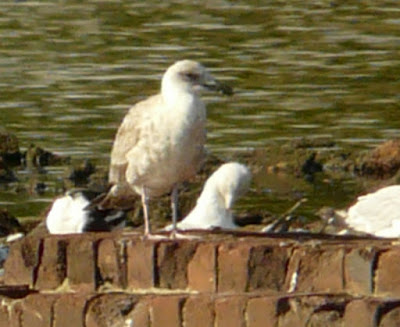 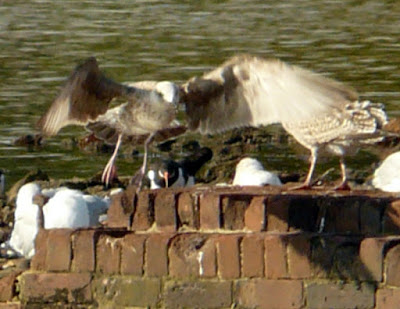 Note  the shape of the tail band - even width across. 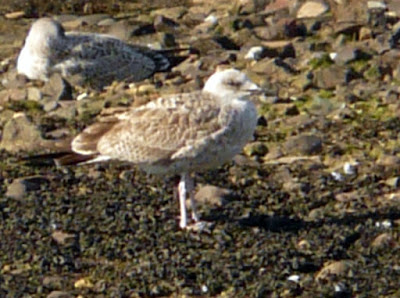 These final shots show a few interesting features. Firstly the eye looks centrally placed in the pear-shaped head giving the Caspian 'look'. There is a hint of the hanging belly behind the legs though this can often be far more apparent in Caspians and is somewhat dependent on how the bird is standing. The overall colour is rather cold-toned and insipid. Light mousey grey-brown as opposed to chocolate brown. Yellow-legged Gulls often look much darker at this time of year. The greater coverts in my opinion are still a much better match for Caspian Gull - being more 'freckled' and less strongly marked. Of the twenty or so juv Yellow-legged Gulls that I've seen this summer/autumn, or in previous years for that matter, none have shown this type of diffuse patterning.  And finally, the tertials lack the crisp fringes so characteristic of Yellow-legged Gull. A diffuse cream tip is better for Caspian Gull. 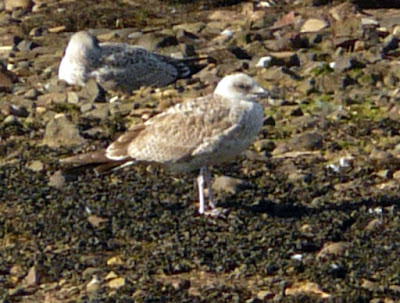 When you add all the subtle features together I feel they better fit Caspian Gull but I'll be the first to admit that my experience with this species is limited to 3 previously self-found (all photographed and accepted) Devon birds - 2 first-winters and an adult. Juvenile plumage is perhaps the hardest to suss so it has been a bit of a challenge. Below are a couple early September Yellow-legged Gulls to compare: 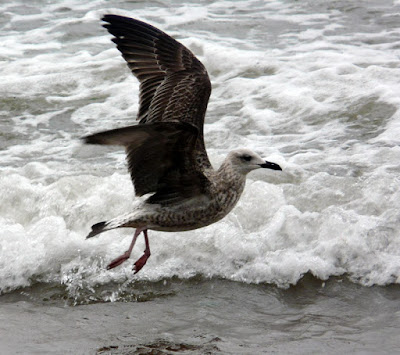 This bird was photographed on Exmouth beach on 6/9 2011. Note the dark underwing and more uniform and dark upper-wing. A beautiful bird. The same individual is pictured below. 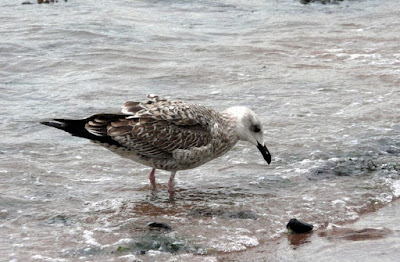 Note the more proportioned look. The head doesn't look too small and is more angular. The greater coverts look nice and well-defined. The tibia look short and the tertials crisp. 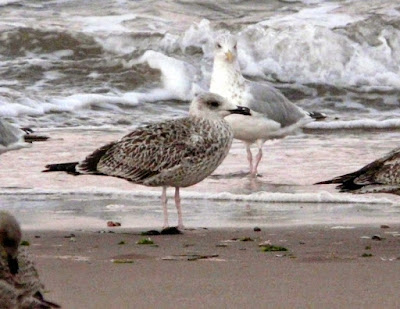 This individual was photographed  on Exmouth beach on 11/9 2014. It has the most Caspian-like greater coverts of any I've seen but at no point did it give off any Caspian vibes. It's a solid, compact-looking bird with a hatchet bill. Another cracker!