A frustrating day of  'probable' sightings today, starting with a flock of c15/20 egrets, distantly over Maer Valley early on, that I'm pretty sure were Cattle Egrets. A little later I'm pretty sure I had a Tree Sparrow go north over Orcombe Point, at 1008, and at around 1240, two (or possibly 3) hirundines flashed between apartment blocks, on Exmouth quay, and out over the river, towards the Warren. My gut feeling was that they were Red-rumped Swallows. They were always flying away from me, gaining height, but they looked cream-buff underneath and not quite right for Swallow. I phoned Kev but they had no sign of them at the Warren.

Believe it or not, today's Yellow-browed Warbler showed quite well at times, but here's the only shot (if you can call it that) that I got of it. There's a worrying trend of my YBW photos getting progressively worse! On the plus side it was lovely to catch up with Keith this afternoon. We watched the YBW until 3pm at least. It clearly moves around the area but seems to return to the largest willow clump at the edge of the carpark. 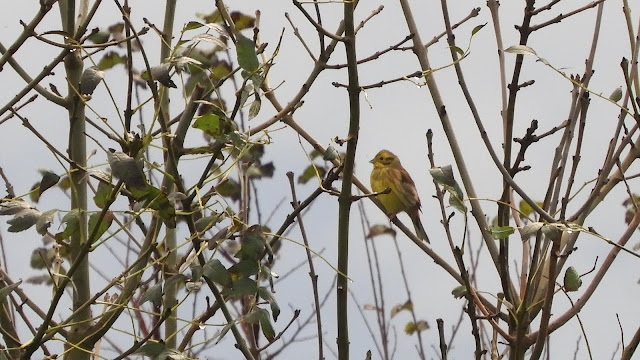