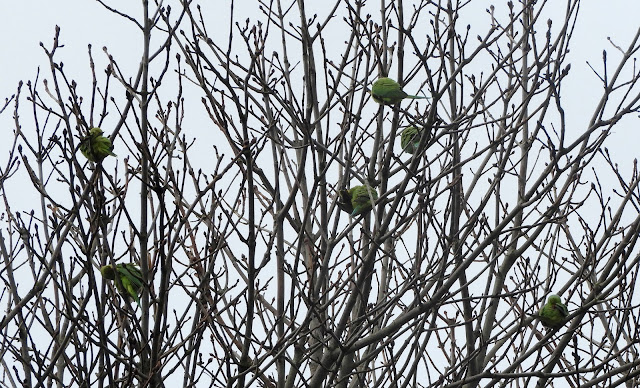 Six Ring-necked Parakeets were roosting in a tree opposite the entrance to the Maer long-stay carpark earlier in the week.

A strong southerly has been blowing again today, so I had a couple looks at the sea from the raised beach huts - from 0730 - 0830 and again from 1050 - 1245, so almost 3 hours in total. Highlight was a beautiful adult Little Gull that headed towards the river, close offshore, at 1210. I'd probably had another go east at 1128 but it was very brief and hampered by shaky scope views. Otherwise - c130 Black-headed Gulls east shortly after first light, 45+ Kittiwakes, 45+ Gannets, 2 diver sp, 2 Red-throated Divers, 1 adult Mediterranean Gull, 11+ Common Scoters, 1 Shelduck, 1 Red-breasted Merganser, 1 Great Crested Grebe and 8 Dark-bellied Brent Geese. At least 8 Turnstones and 2 Purple Sandpipers were on Maer Rocks but I didn't see the Eiders today, and only 8 auks whizzed by, too far out to identify.

Little else to report this week but late news for the 21st concerns the 2 Eider still off Maer Rocks and hundreds of Kittiwakes close past the seafront during the latter part of the morning, and amongst them an adult Little Gull. Counts from Mudbank included 14 Great Crested Grebes, a white-ringed, adult Mediterranean Gull, c30 Redshank, c300+ Dunlin, 2 Knot, 2 Greenshank and 2 Grey Plovers. Six Ring-necked Parakeets were opposite the Maer long-stay carpark. 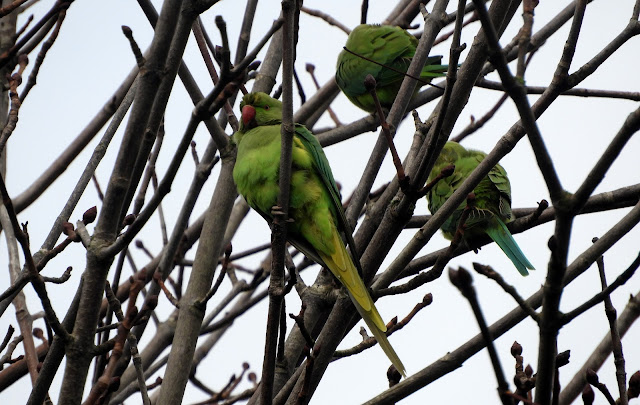