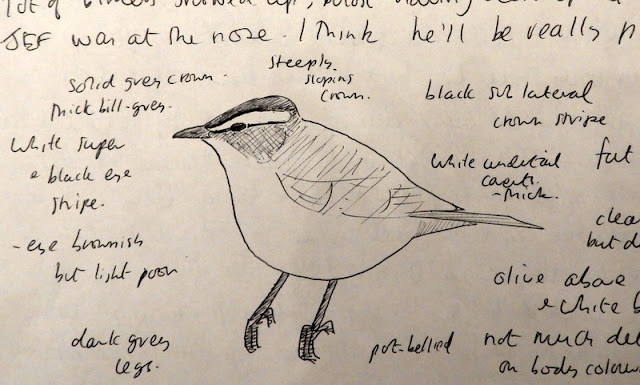 My one and only Devon Red-eyed Vireo was the Dawlish Warren bird on November 4th 1996. A stunning find by Ivan Lakin, and one that I think is unlikely to be repeated, in an era when American passerines are turning up pretty much exclusively in the Northern Isles or the very far south-west of Cornwall/Scillies, unless you include Ireland of course. To get one on the Exe is nothing short of astonishing, although we did get an American Robin on Exminster Marshes!
My logbook entry for 4/11/96 reads:
A Common Nighthawk was seen by Will Wagstaff this morning, hawking insects over the M5, 500 yards north of junction 28 near Cullompton.
James(my brother) has had the car all day for work, and Kevin and I couldn't wangle a lift up, but the news was that the bird hadn't been relocated.
Shortly after lunch Kev phoned in a slightly panicked state, to say there was a Red-eyed Vireo at the Warren, found by Ivan. He shortly afterwards phoned to say there was a train from Newton Abbot to the Warren at 1357.
I met him at the bottom shop near Dyrons Leisure Centre (he's staying with Debs) and we walked briskly to the station, making it with about 5 minutes to spare. We phoned the line for exact directions and the train pulled up at the Warren at 1410. Another quick walk and we met John Gale who'd pinned the bird down in the sallows at the back of the pond. It was hopping around slowly, from branch to branch, and I had poor views before it flew off and couldn't be relocated.
Half an hour or so later it was re-found back in the same spot, and I had superb views down to about 10 yards as it hopped around in the middle of a 'woody' stand of sallows, with brambes at the base. On the occasions it sat out in the open I got the solid grey crown, black sub-lateral crown-stripe, white supercilium, black eye-stripe, dark grey legs, white underparts, sloping forehead and heavy bill.
In fight it looked fat and clumsy. It fed high-up in Birches as well, but seemed to favour lower down at about head height. It was good at getting lost.
Quite a lot of birders showed up, most having been up at Cullompton! John Fortey was at Hope's Nose. I think he'll be really p*ssed off!
The day before I'd been down to Lipson Vale Community College, in Plymouth, for my first (and last) Devon Icterine Warbler. Another amazing find, this time by Pete Aley, in the most unlikely of spots. My logbook entry for 3/11/96 reads:
I got soaked ,in awful weather, dipping the bird yesterday in the unlikely setting of Lipson Vale Community College grounds. I'd imagined the area of trees mentioned on the line to be a small clump, but it's a bloody great area of Sycamores, Oaks and large Hawthorns, covering a rather steep, muddy slope.
I didn't come close to seeing this bird, found by Pete Aley, yesterday. Today however, a small group of birders, standing just inside the wood, led Kevin and I to the Hawthorn bush that the bird was favouring. In fact it remained in the same bush for the entire hour we were there. Often out of sight for long periods however.
It was just slowly hopping about. At one point it gobbled up quite a large type of insect. It seemed to spend most of its time just sitting still, occasionally preening. When it hopped in to view it did show well - looking superb, just like in photos, with a humongous orange bill, strong yellow, short supercilium and distinctive peaked crown - more pronounced and crest-like when wind-blown. The yellow extended to the throat and the clean underparts had a faint lemon hue to them. The tail was comparatively  short and the under-tail coverts long. The legs were dark blue-grey and I once had a good clear view of the long, pointed primaries. The most striking feature, when visible, was the stunning whitish rectangular 'blaze' on the secondaries - hyper-obvious. There looked to be some lemonish fringes to other remiges, but I didn't pin-point exactly where.
The bird was quite stocky and pot-bellied. It's a much more striking bird than I'd expected, and I'm sure I wouldn't have too much trouble separating it from the rounder-crowned and plainer Melodious Warbler.
I had great views in the scope at down to about 12+ yards. The light wasn't brilliant but when the bird got in to the left-hand side of the bush the views were great. The tail appeared short and square but was in fact notched - see notes.
We searched Efford Marsh for the Yellow-browed Warbler that's been around, but scored only Firecrest! 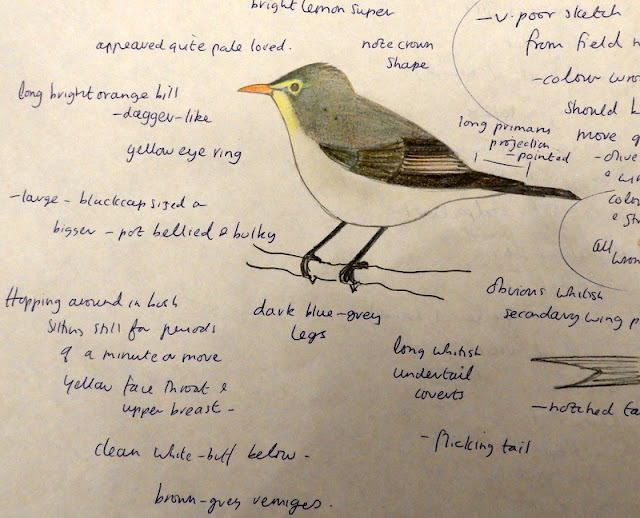