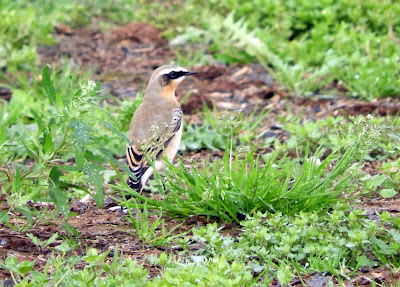 This large and colourful Wheatear is probably a 'Greenland-type' - photographed on Orcombe a couple days ago.


Just a single Sedge Warbler noted on a quick scoot around Orcombe, after work this afternoon. Two Arctic Skuas were offshore, showing interest in c20+ Kittiwake that were lingering, and a White Wagtail was on the beach with c10+ Pied Wagtail.
A large gathering of gulls and terns off the docks included 3 Black Tern (Spencer had four), c10+ Common Tern, c30/40+ Sandwich Tern and at least 2 Mediterranean Gulls.
Just one Greenshank was the only bird of note off Mudbank.
Posted by matt knott at 10:35