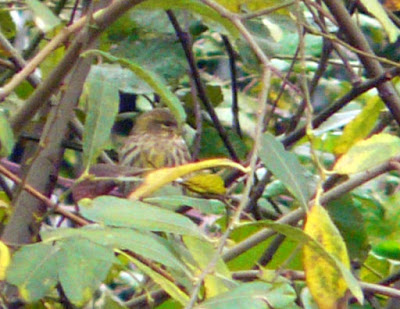 Serin
I got soaked traipsing around Orcombe this morning and didn't see much, so it was back for breakfast early. I was then able to get back out later when Lu took the kids to her parents' house to put up surprise 50th wedding anniversary decorations.  It was a bit drier by then. The Dartford Warbler was being elusive in the hedge at the top of Gore Lane but there was little else. I decided to try Maer Valley, which is just outside the patch boundary, but could only find 1 Mistle Thrush, 2+ Redwing, 1 Fieldfare, 3+ Chiffchaff and a Firecrest, so I headed home. Lu and the kids were by now out with the dog so I thought I'd whack the wellies on and trudge around the football pitch at the back of our house. In the corner, behind where all the goals are stacked, loads of birds were flipping out of the bushes. There were stacks of Goldfinches and Greenfinches as well as other common stuff. I was trying to check each movement when suddenly I locked on to a finch with its back to me, way up in a sycamore. It was partially obscured by leaves but it was surely streaked! I tried to get a better angle but it shot off and out of sight. The only thing I could think it could be was Serin but it hadn't called and I didn't have enough on It to claim it as such. For the next half hour or so I walked the edges of the pitches, checking the Goldfinch flocks but things weren't looking good. I knew that if there was a Serin in with them that I'd pick it up on call. I headed back to where I'd originally seen it and some movement in a sallow caught my eye. I lifted my bins expecting a Chiffie but there was a Serin! For the next hour or so it was coming down to feed in weeds below the sallows and then zipping around a bit before dropping down again. I was chuffed that Derek and Dave managed to see it before it got dark.
If it stays, and anyone wants to see it, please bare in mind that the pitches are privately owned. Having said that, I don't think anyone would mind birders there as long as they were being sensible. To see it, you want to stand by the big red London Bus and scan the weeds and sallows at the back of the car parking area. It's Saturday tomorrow so expect it to be busy from 9am onwards! 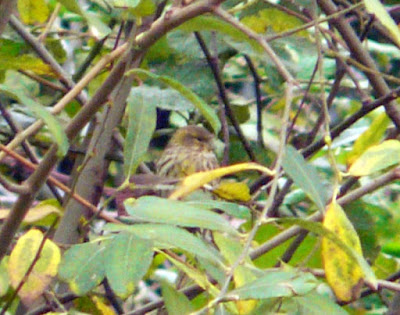 I'm not sure about the age of this bird but yellow patches on the breast presumably make it a male - surely a juvenile one? 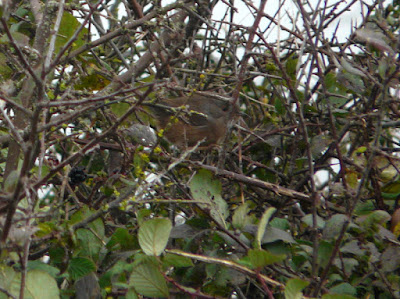 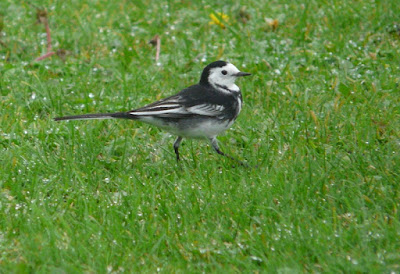