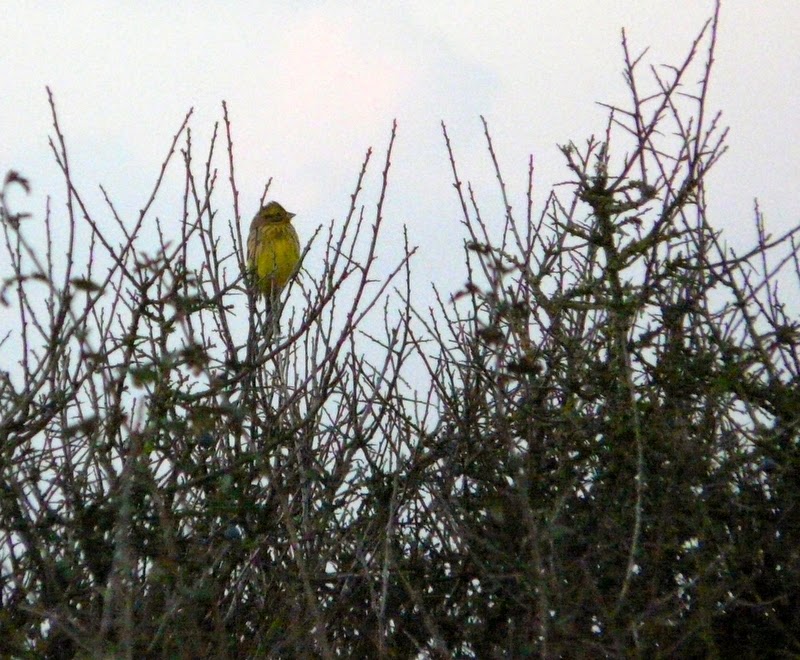 Yellowhammer - it's been a good Autumn for this species on Orcombe. This individual was initially detected by its call, from deep in cover, but it quickly popped up to show itself before flying off.
A really nice November morning both weather-wise and bird-wise. Nick and I were on Orcombe Point from dawn and clear skies signalled some late autumn migrant movement. The best bird was a snow bunting that flew west at 0730. It was picked up by its repeated plaintive, clipped 'chu' flight call. A nervous few seconds ensued before we clapped eyes on it and there was relief all round as it flashed huge white wing patches, enabling separation from the very similar-sounding lapland bunting. It was presumably a male, showing so much white, and it represents the first definite record for Orcombe as I've had to let a couple 'probables' go.
Other species logged this morning included 10+ blackbird, 5+ song thrush, 2+ chiffchaff, 2+ brambling, c60+ chaffinch, c20+ meadow pipit, 5+ pied wagtail, 1+ redwing, c10+ greenfinch, 1 grey wagtail, c20+ goldfinch, 1 yellowhammer, 2 blackcap, c900+ woodpigeon, 1 great northern diver, 2+ reed bunting, 1 rook, 16 stock dove, c10+ skylark, 1 great spotted woodpecker and 3 starling.
﻿ 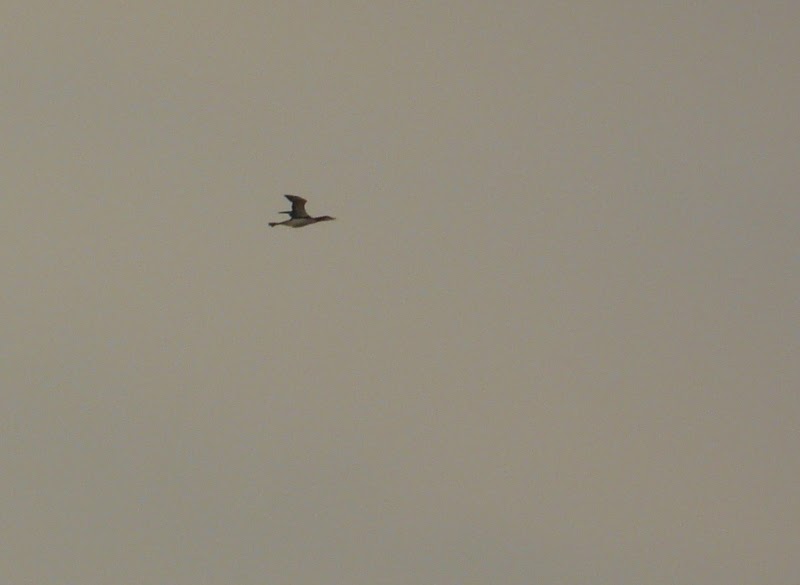 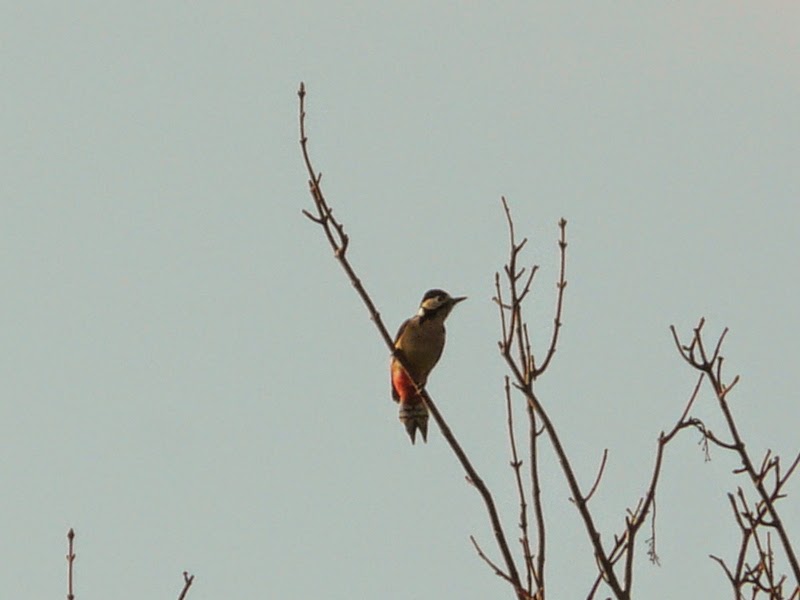 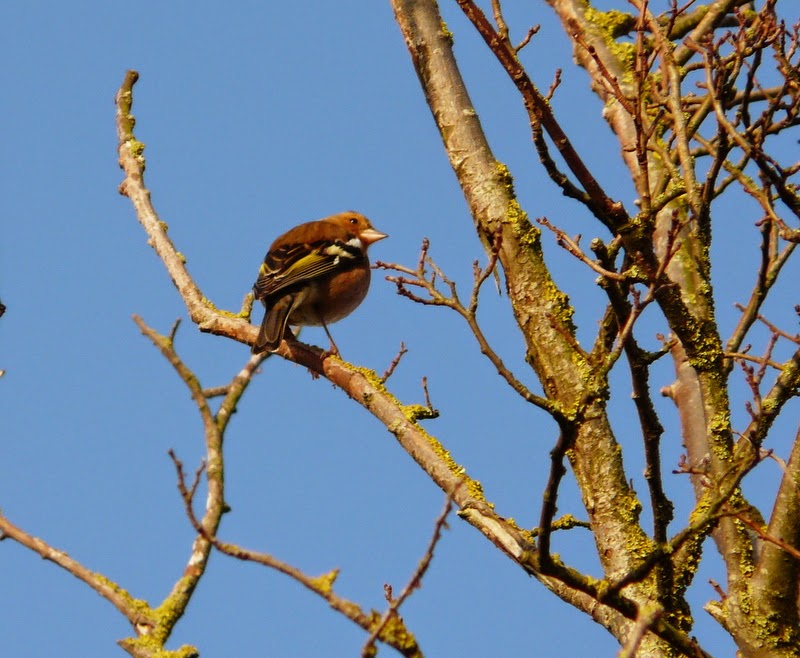 Chaffinch - a few overhead this morning and a few dropping down into cover. 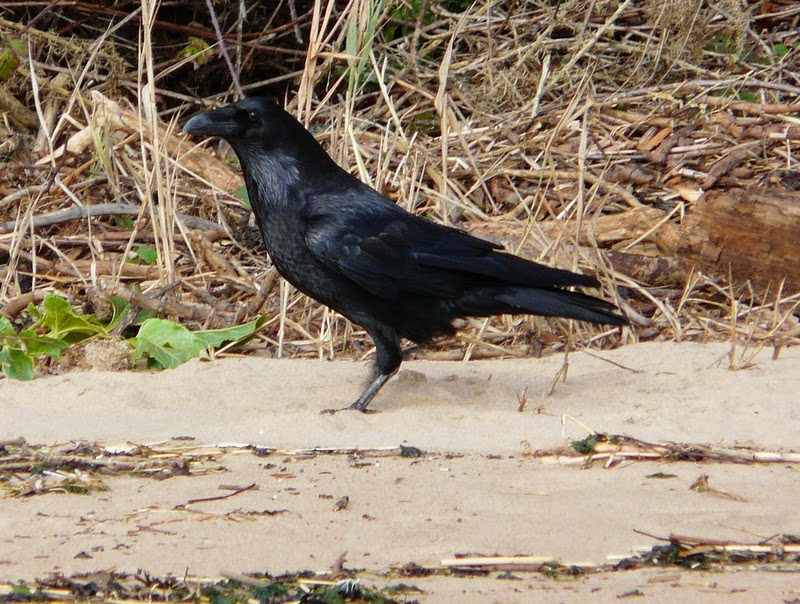 A late morning dog-walk, from Orcombe to Sandy Bay, with the family produced good views of this raven and a second bird up on the cliffs, being mobbed by a pair of kestrels. 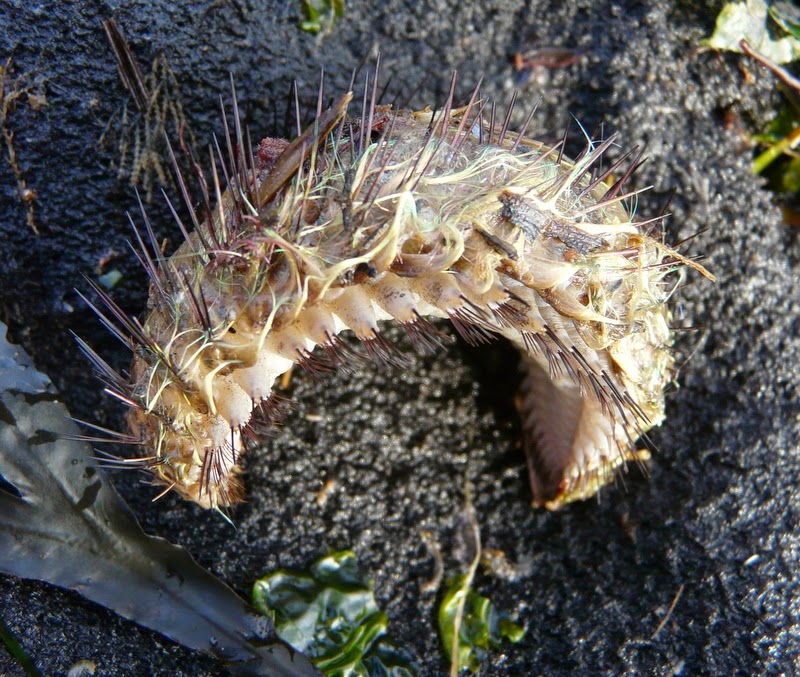 We found this thumb-sized invertebrate whist doing some beach-combing (along with 10 golf balls, several rubber gloves, lots of dead fish, loads of tin cans, a starfish and a number of sea-urchins). I've no idea what it is. The spines are really sharp. Any ideas? A very odd creature!
Edit - a big thank you to Andrew Cunningham for identifying this as a Sea Mouse! See 'comments' below. 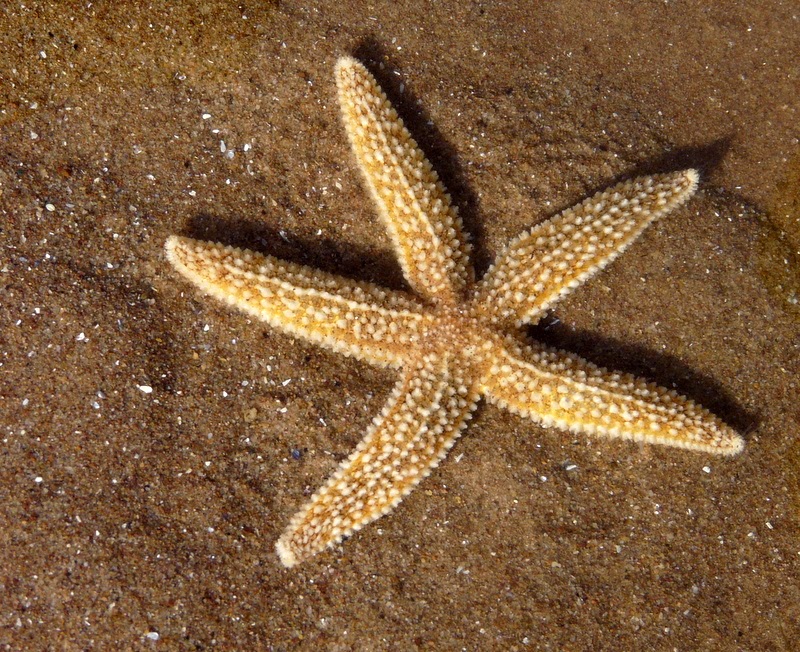 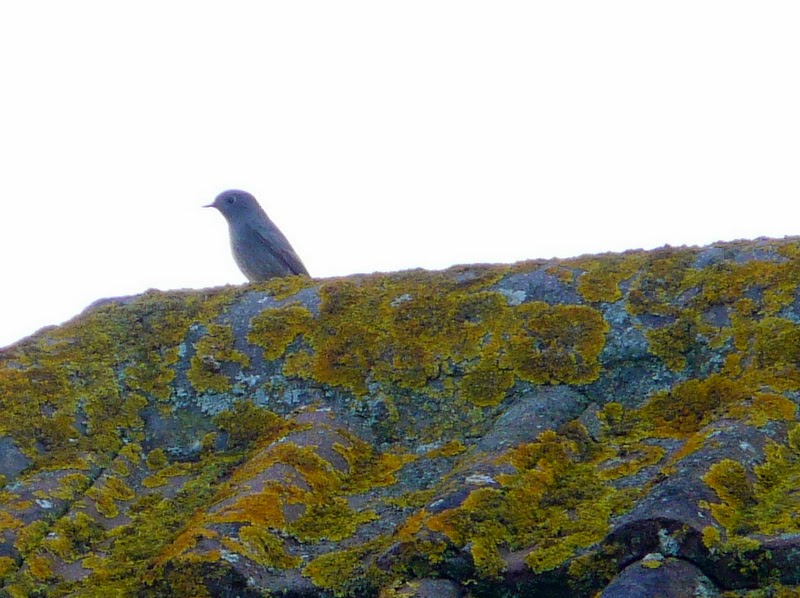 Black Redstart - Harbour Court, Exmouth Docks.
This afternoon I nipped out in search of black redstarts and found one almost immediately, fly-catching from roof-tops around Harbour Court. A decent pale flash in the wing presumably makes this bird an immature male but my views weren't great.
﻿ 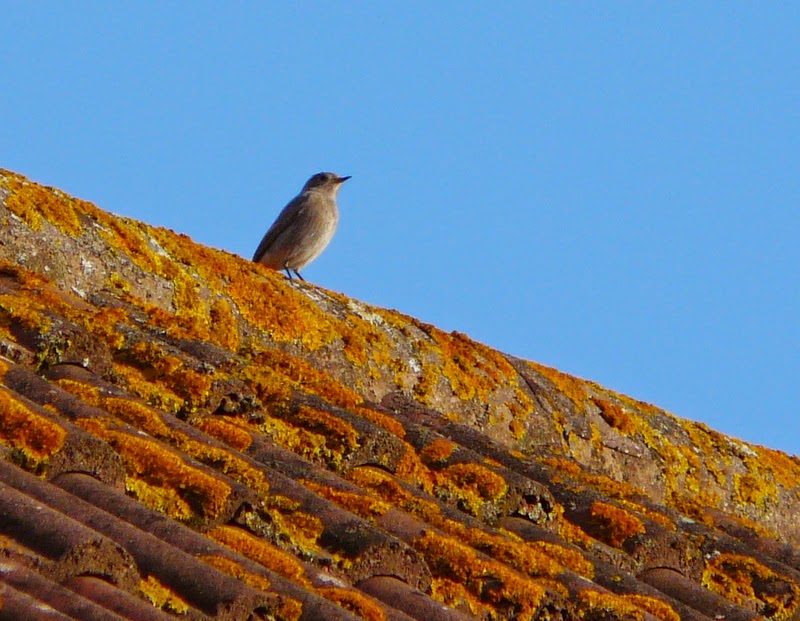 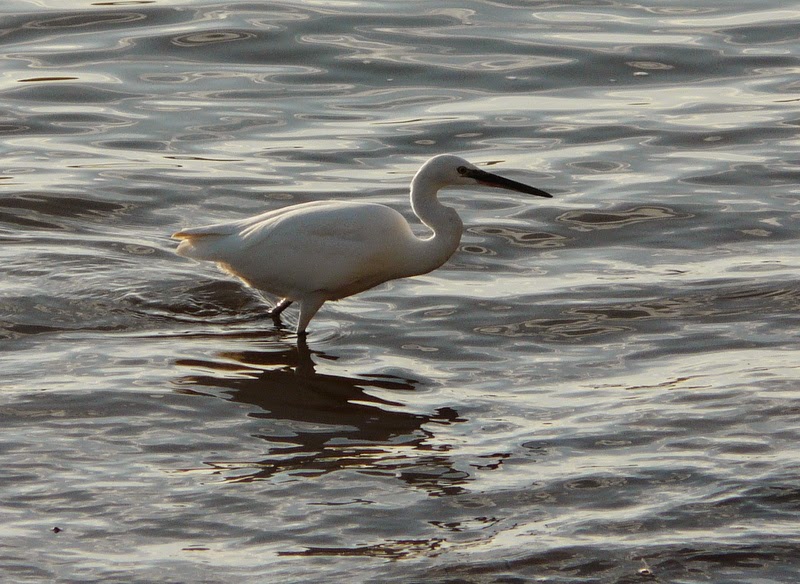 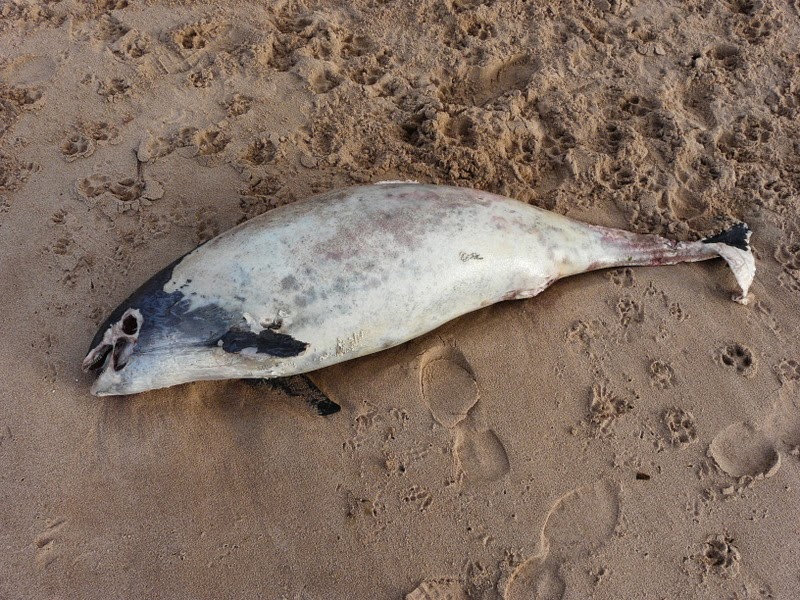 This dead porpoise (I presume it's harbour porpoise) was on the beach between the lifeboat station and Orcombe Point last weekend. Its dorsal fin is missing so perhaps it was hit by a boat. A sad sight. To get an idea of its size compare with the footprints next to it. 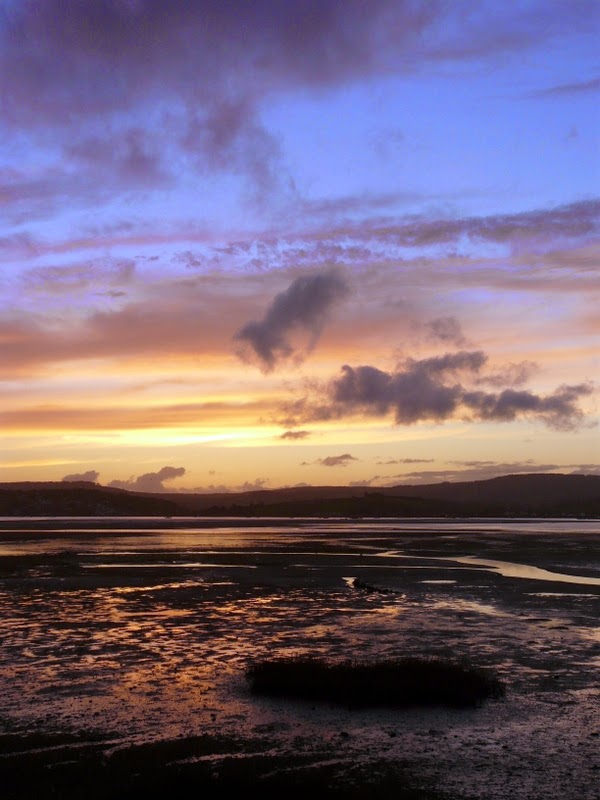 Finally, a scenic shot of the Exe estuary from Mudbank last night.
Posted by matt knott at 09:10