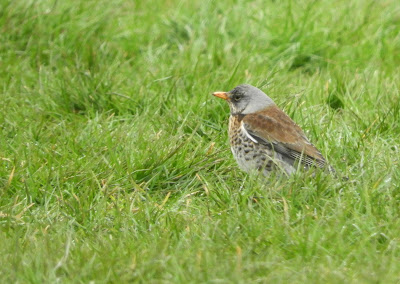 Fieldfare. Smaller numbers of winter thrushes, but significant numbers none the less, remained in Exmouth today. Perhaps most notable was a count of 10 Song Thrush together on Warren View playing fields, at the back of our house, late this afternoon.
Nick and I covered a few sites this morning. Off Maer Rocks at first light - 2 immature drake Eider, 2 Great Northern Diver, 2 Red-throated Diver and a Fulmar were logged on a brief watch.
The cricket pitch produced 13 Golden Plover and 28 Lapwing, and on the Imperial Rugby pitches and adjoining recreational area - 80+ Lapwing, 1 Ruff (0650 only), 21+ Golden Plover, 1 Mistle Thrush, c40+ Dark-bellied Brent Goose and small numbers of both Redwing and Fieldfare. On the river - a Sandwich Tern and 6 Goldeneye.
Other sightings whilst out and about today included a Knot and 11+ Bar-tailed Godwit off Mudbank, an adult Mediterranean Gull along the seafront and the Black Redstart and a Kestrel on Orcombe Point.
Late this afternoon at least 10 Song Thrush were with a handful of Redwing on Warren View playing field and a Blackcap was in the garden. 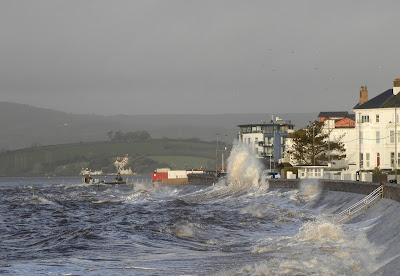 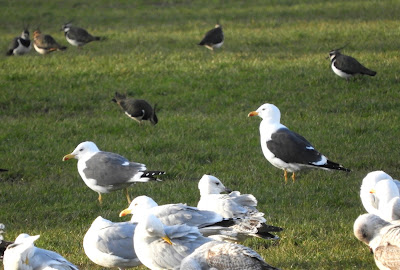 Different shades of Lesser Black-backed Gull with a possible intermedius on the right. 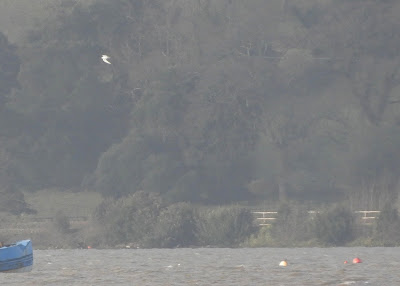 An early Sandwich Tern heading down river off the Imperial early this morning. Click on image to enlarge. 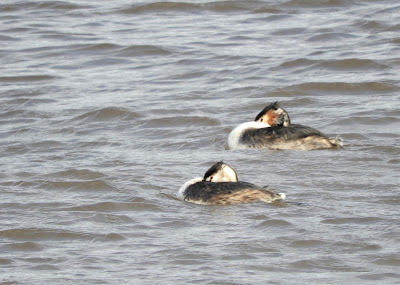 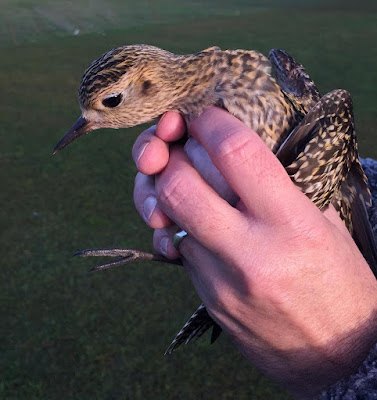 Nick and I rescued this Golden Plover that had crashed into the low wire fence that surrounds the cricket pitch. What appeared to be a minor cut on the wing didn't prevent it from flying off strongly. I couldn't believe how light and small it felt in my hands - a timely reminder of how delicate and vulnerable these birds are. Thank you to Nick for the use of this photo. 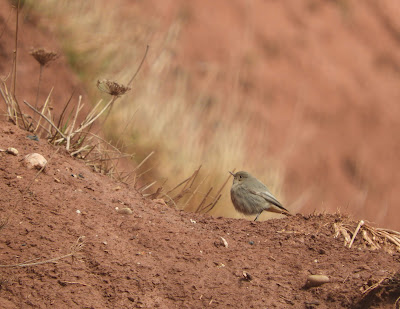 Derek's Black Redstart - Orcombe Point - viewed from the beach. This is the first one I've seen in Exmouth this winter. 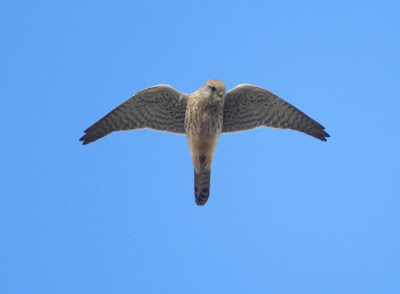